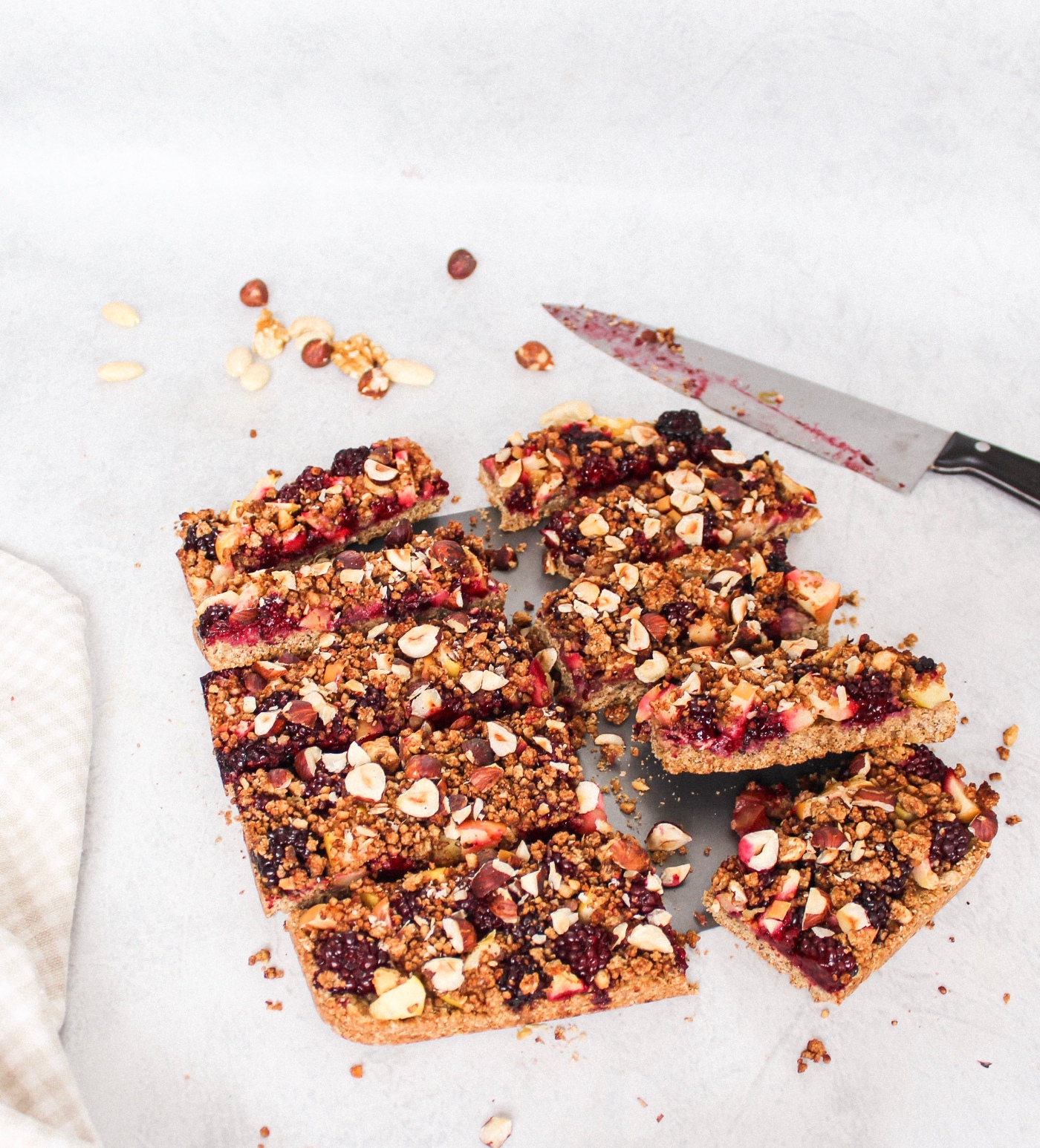 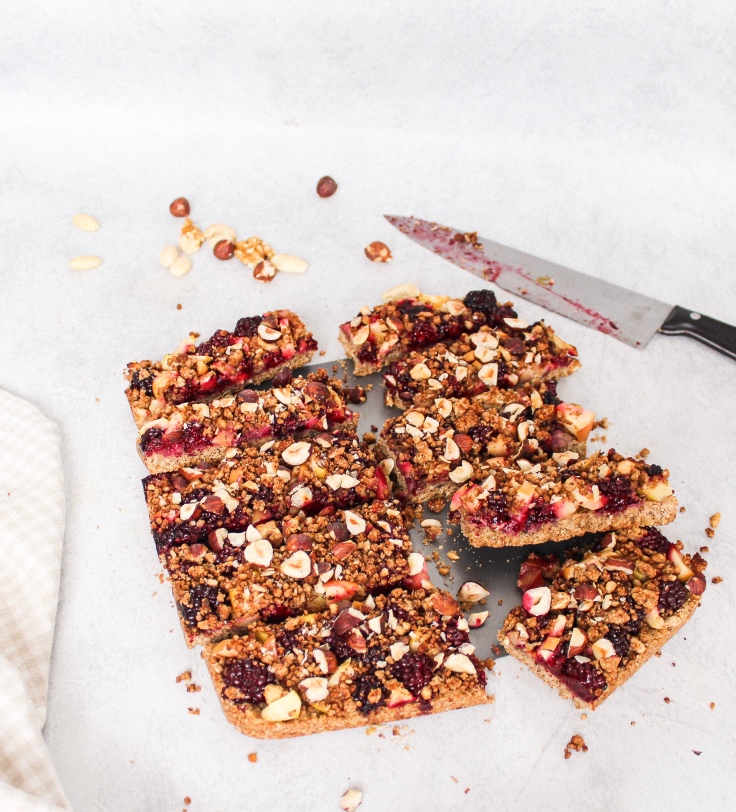 Following the success that my previous crumble bars had, I simply had to create another re-vamped recipe, which is even tastier than its fellow friend. Naturally, I had to include blackberries in this recipe, and considering they are in season and can be picked from every bushy corner, they are both an organic and cheap ingredient to use! 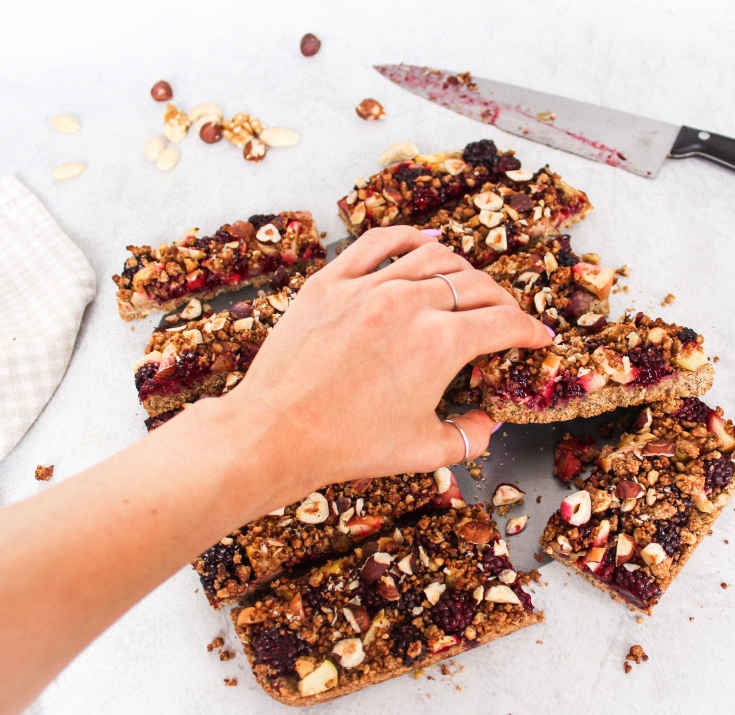 The bars have a crumbly and melt-in-the-mouth base made from a combination of buckwheat flour, oats and nuts which together create the perfect texture, and thanks to the coconut sugar they have a delightful golden colour and a delicate caramel flavour. The crumble topping is even more crumbly than the base thanks to the chopped hazelnuts which add a toasty depth of flavour; altogether, paired with the juicy berries and tangy apple, these bars are decadent. 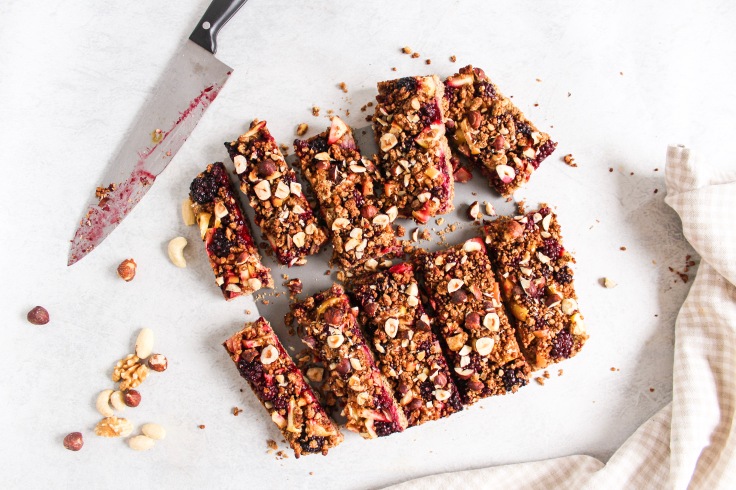 I’m sure that many of you will love the simplicity of these; if you have a food processor, simply throw the ingredients in there and blitz away, or alternately just mix them by hand in one bowl. They really don’t take a patisserie genius to make, and I guarantee they will impress your family and friends alike, regardless of if they are plant-based or not. 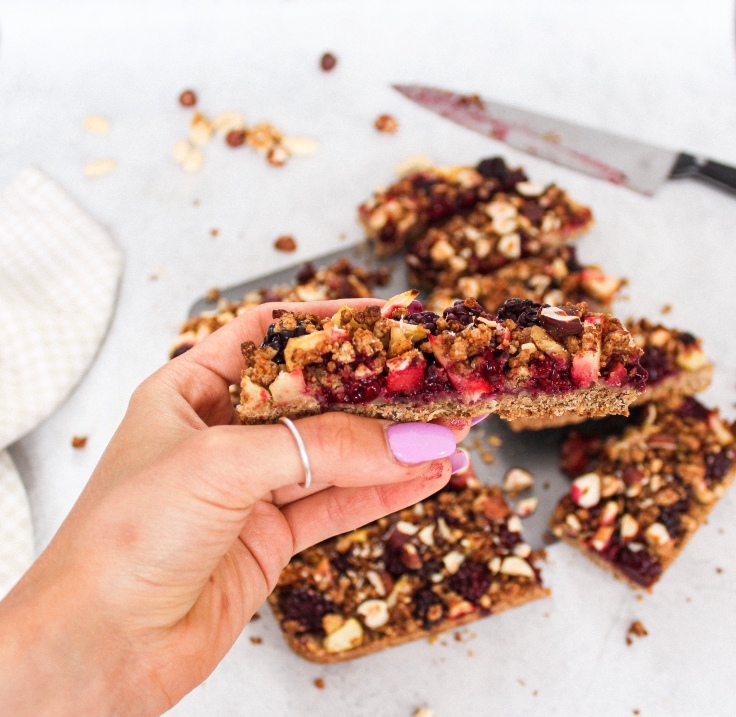 As with all of my recipes, there is room for creativity; make these bars yours by using your favourite fruit and nut combos, however, I do recommend using fruit that’s in season, as it not only tastes far better but also has less of an impact on the planet. You fancy some crumble bars but it’s not blackberry season? No problem: use figs, plums (or other stone fruits), frozen berries, pears, or combinations of fruits; the possibilities are endless, so get in your kitchen and experiment. 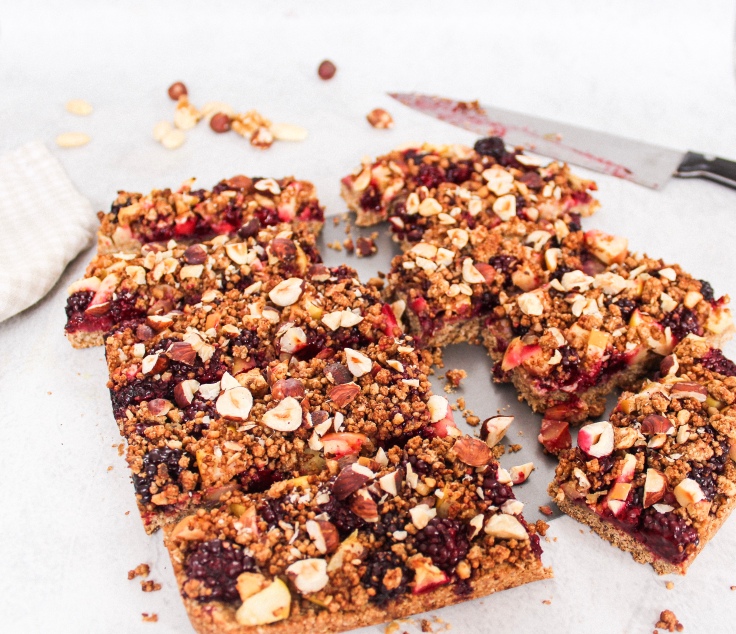 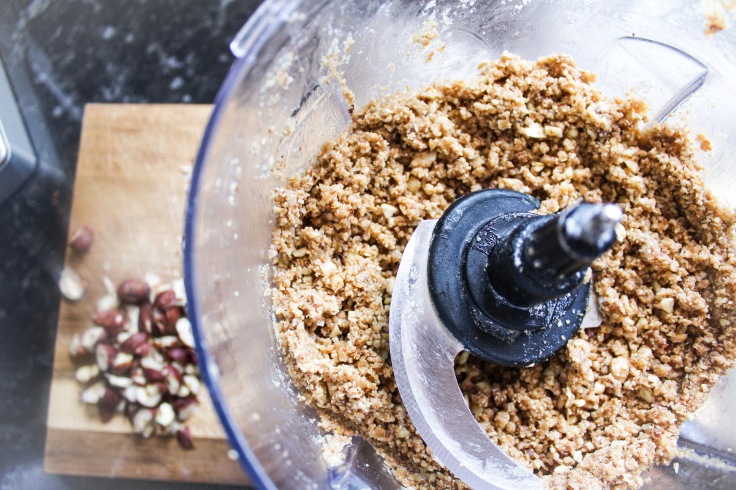 Mix the milled linseed with 5 tablespoons of water and set aside.

Place the oats in a food processor or blender and blend until they form a flour, next add the buckwheat flour, coconut sugar, bicarbonate of soda and half of the nuts, and blend until coarse breadcrumb forms. Alternatively, blend the oats to form a flour, finely chop the nuts and combine with the remaining dry ingredients.

Next, in a small saucepan melt the coconut oil, then stir in the maple syrup and allow to gently cool before adding to the dry mix, along with the soaked linseed (including the water), and blend until a crumble forms. You can do this by hand in a mixing bowl if you don’t have a food processor.

Next, remove 100g of the mix and set aside, then press the remaining mix into a lined brownie tin, and bake in the centre of the oven for 7 minutes.

Finally, chop the remaining nuts, sprinkle over the crumble, and bake for a final two minutes until the nuts are toasted. Allow the bars to cool completely before slicing, as they won’t hold their shape when hot. 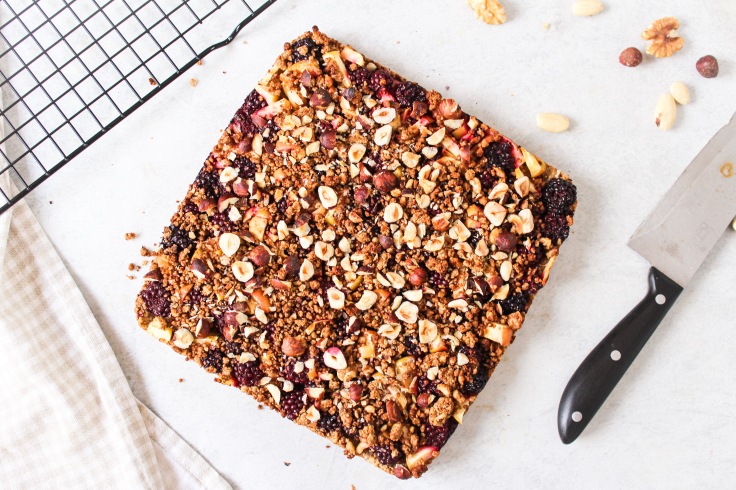 Mother’s Day açai + lucuma breakfast muffins are coming your way very soon!💜
Chia pudding, yay or nay? 💜 over the years I’ve fallen in and out of love with this creamy gooey breakfast, and right now I’m in love! Especially with this blueberry and maca layered thing of perfection 🤩
Hey, here is a tease of a glorious banana bread coming to my ebook🍌 (MISO + tahini 😉) it’s soft, nutty, slightly salty and sorry but, *moist*
Just reminiscing about these glorious tahini + sunflower seed choc chunk blondie bars as I plan my goals for the month💫✅